This guide aims to provide a basic and simple understanding of how to operate the Mk6 mortar in Arma 3 with ACE 3. Whenever you are employed in a mortar role you are expected to use these skills in an competent and accurate manner. A working knowledge of ACE 3, map reading, and basic navigation equipment is required. These steps must be practiced and refreshed. The steps presented in this guide will enable the user to conduct a basic fire mission on their own from start to finish allowing them to be effective within a mortar crew. 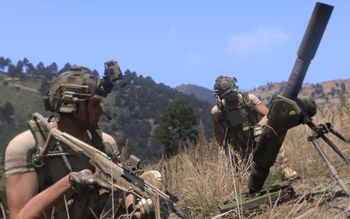 In order to operate the Mk6 mortar in an indirect fire role the following equipment is required:

To set up the Mk6 Mortar you must have both pieces with one of them being on the ground in front of you and one being in your backpack slot. Select the action: Assemble Mk6 Mortar.

Once assembled you can carry or drag the weapon by using ACE interaction. To tear down the mortar make sure you are out of it and select the action: Disassemble Mk6 Mortar.

Make sure to have mortar ammunition in your inventory so you can load the mortar later.

In order to aim and fire the mortar correctly in an indirect role you must produce firing data. Firing data can be broken down into two categories: map data, and gun data. Map data pertains to general positional information determined through the use of the map while gun data pertains to a particular weapon system such as the Mk6 mortar. A target is required to calculate firing data.

Determine the grid and altitude of the mortar and plot the location on the map. 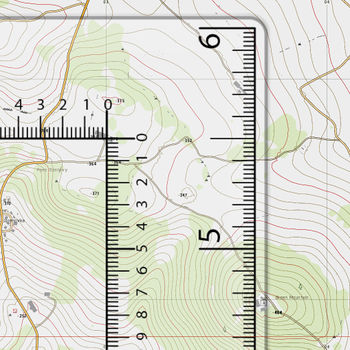 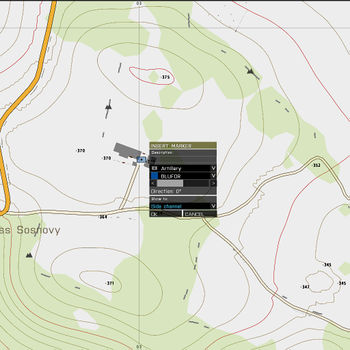 Determine the grid and altitude of the target and plot the location on the map. 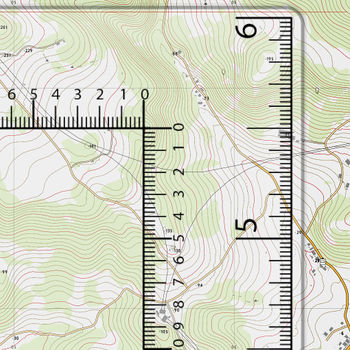 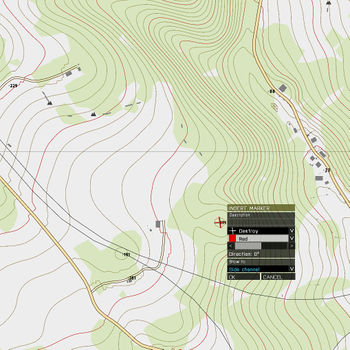 Determine the direction in mils and distance in meters to the target. 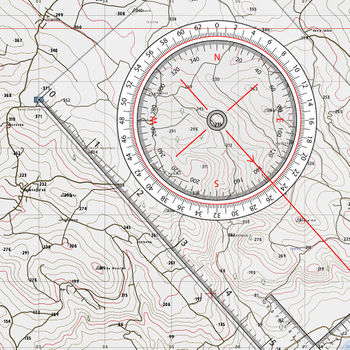 Once you have determined these things you have produced map data which can be used to produce gun data for your mortar to lay onto target.

Determine the ammunition type to be fired. High Explosive, Smoke, and Flares are available.

Select the charge increment that covers the distance to the target. The ranges are listed in the range column for the various distances. Charges allow the projectile to move greater distances and increase the time of flight. 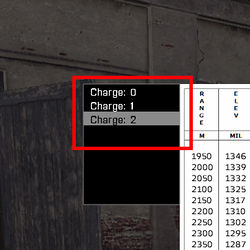 In the elevation column find the elevation that corresponds to your distance in the range column. This is the base elevation for that range. If the altitude difference is less than 100m then you don't need to calculate the next two steps. Use this number as your calculated elevation. 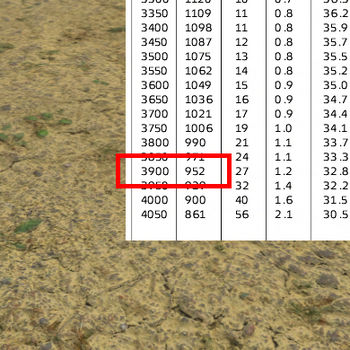 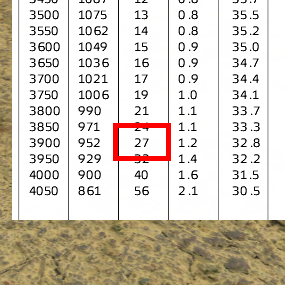 Now you must calculate the elevation by using the base elevation number and elevation difference per 100 meters number.

If the target is 200m below the mortar multiply the number by 2 and add it to the base elevation.

If the target is 200m above the mortar multiply the number by 2 and subtract it to the base elevation.

Map data and gun data has been determined resulting in firing data being produced in the form of ammunition, charge, direction, and elevation.

You must have the ammunition items in your inventory. To unload select: Interact > Remove Round. 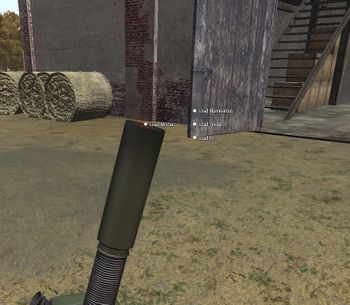 Once in the gunners seat of the mortar you will be presented with the gunners sight. Using the previously calculated firing data you can apply the data onto the Mk6 mortar.

Traverse the mortar to the calculated direction by moving your mouse Left and Right. 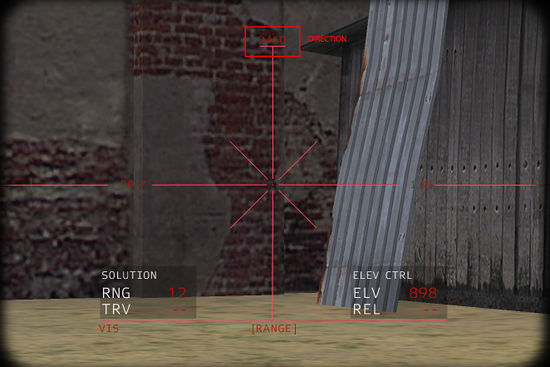 Align the mortar to the calculated elevation by pressing Page Up or Page Down. Include Shift for single digit increments. 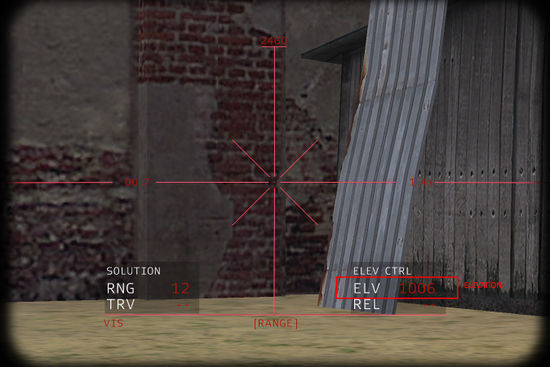 Verify that the ammunition, charge, direction, and elevation values have not accidently changed while applying settings. The mortar is now laid onto the target and ready to fire. 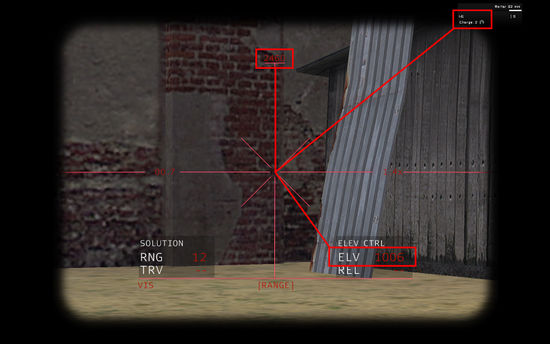 Fire the mortar by pressing the Left mouse button (Fire).

The mortar bomb will move towards the target you have calculated and oriented onto and deliver effects on the ground. 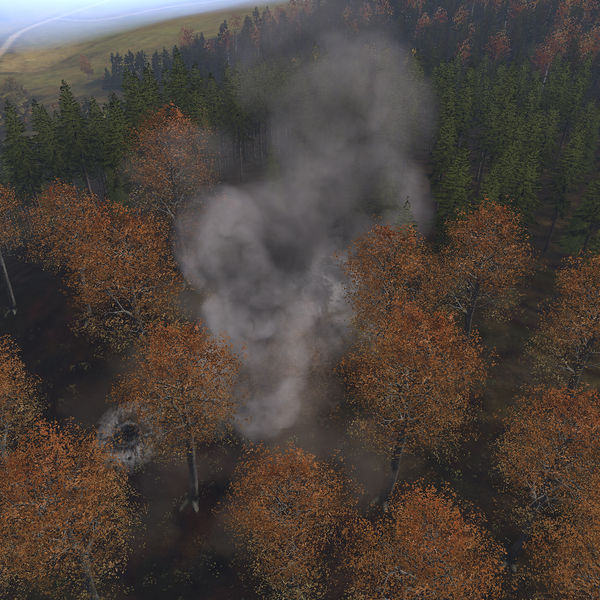 You have now completed all necessary steps to firing the Mk6 mortar indirectly.

If you want to make the rounds drop further decrease elevation.

If you want to make the rounds drop closer increase elevation.

If the direction is not correct to the target it will increase in error over a larger distance.

Keep the charge increment consistent throughout your firing on a single target.

Difference in altitude affects the trajectory and must be taken into account for accuracy.

Linear interpolation of the range tables for specific distances not listed will allow for more precise elevations.

Deploy the mortar on an altitude that will closely match the target altitudes to reduce calculations required.

When adjusting figure out the correction that needs to be made by recalculating map and gun data for the new location in relation to the old location. example: Northeast 150m

To fire the Mk6 mortar in the direct role you must have line of sight from the weapon to the target.

You must have the ammunition items in your inventory. To unload select: Interact > Remove Round.

Once in the gunners seat, traverse the mortar to the direction of the target by moving your mouse Left and Right. Aim the sight at the ground in front of the target. 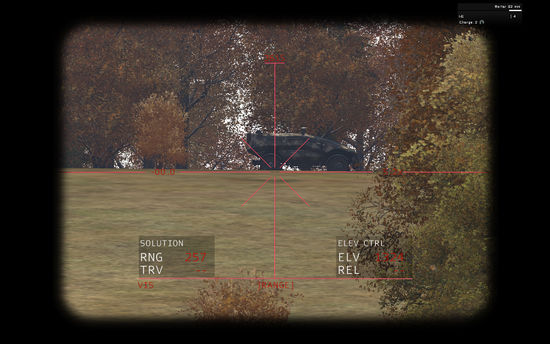 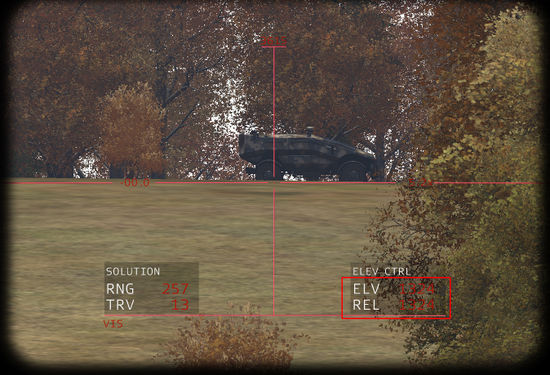 The mortar is now laid onto the target and ready to fire. Fire the mortar by pressing the Left mouse button (Fire). 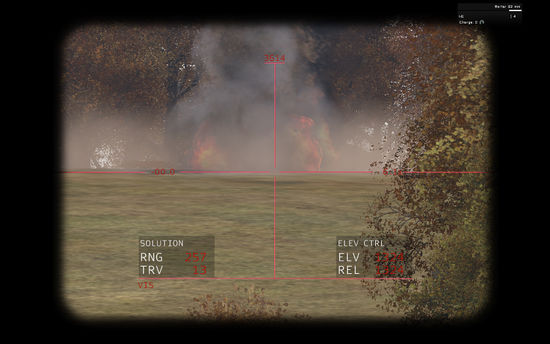 Operating in a mortar crew

Operating a crew served weapon requires teamwork and coordination. All members of the team should understand their role and what is required to complete various task. The mortar team can be broken down into two key positions, mortar commander and mortar gunner.

Mortar commanders are responsible for selecting a position for the mortar, communicating with the supported group, producing firing data for the gunner, and supervising the operation of the mortar.

Mortar gunners are responsible for operating the mortar in the indirect and direct roles by applying firing data onto the mortar as ordered and firing as ordered.

an assistant may also be employed to carry ammunition and equipment as well as act as security or relief to the team.

Orders should be given clearly and consistently. Information should be double checked and acknowledged. Fire discipline is important for communication within the team and effectiveness in support of other groups. Common prowords and formats should be understood and applied.

The convention for firing is to fire the number of rounds ordered once the mortar is ready unless at my command has been ordered. At my command must be acknowledged by the gunner and the Fire order given by the commander. Rounds complete should be reported by the gunner once the method of fire is concluded. The commander should always verify that the gunner has inputted the firing data correctly by getting in the weapon and doing a double check prior to firing the first round in a fire mission. To remember the orders format use a mnemonic such as: Will My Artillery Destroy Everyone?